éirígí general secretary Breandán MacCionnaith has added the party’s support to this Sunday’s planned protest at Maghaberry prison outside Belfast.

Conditions for the republican prisoners held in the prison have deteriorated rapidly since the collapse of an agreement concerning their treatment earlier this year, leading the families and friend of the prisoners to call for support from the public.

MacCionnaith said: “The situation in Maghaberry jail has reached crisis point.  Republican prisoners are being brutalised and assaulted by gangs of prison officers on an appallingly regular basis – the latest victim being Harry Fitzsimons as recently as Monday.

“In contravention of the agreement that was reached in August last year, prisoners are regularly being subjected to humiliating strip searches and face the threat of beatings and the forced removal of their clothing when they refuse to consent to these searches.  The prisoners are subjected to 23-24 hour lock-up and many have been forced to begin a no wash protest." 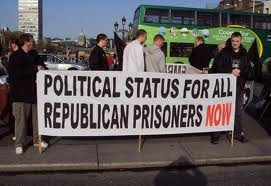 “This is an intolerable situation that goes against not just the August 12 agreement but every notion of humane treatment.”

MacCionnaith continued: “Policy in Maghaberry prison is currently being dictated by the notoriously sectarian Prison Officers Association, with all the negative consequences that that entails.

“Pressure must be placed on the British government to face down these bigots and implement a humane prison regime, in line with the August 12 agreement.  Ultimately, only the full restoration of political status for political prisoners will resolve the conflict in Maghaberry.

“To begin building this pressure, éirígí is calling on republicans, socialists and all those concerned about human rights to take two hours out of their weekend and join the protest at Maghaberry this Sunday.”

People are asked to assemble at the Maghaberry prison car park at 3.30pm this Sunday [June 5].
Posted by éirígí Sligeach at 4:52 PM