The following article was written by former Republican POW and Blanketman Alec McCrory from Belfast.  It was written following a recent protest at Maghaberry prison in support of the Republican POW's
Returning from the protest several cars and a minibus were stopped on the Miora Road by the RUC/PSNI. There were 8 to 10 land rovers present and a few dozen of the meanest looking cops dressed like something out of a Star Wars movie.
All the passengers on the minibus, including children, were ordered out of the vehicle onto the hard shoulder where they were searched and asked for their personal details. This was the second time in an hour that the bus had been stopped; the first being on the Donegal Road as it was leaving Belfast. In total upward to thirty people were stopped and searched in what was clearly an intelligence gathering exercise. The protest at the jail, attended by 500 people, was peaceful and orderly throughout. It now appears that anyone, regardless of age, participating in peaceful protest will be targeted by the state. 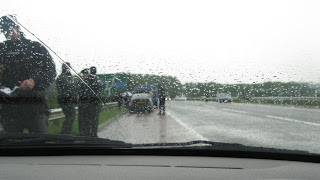 Earlier in the afternoon I was stopped on the Anderstown Road.  Two land rovers and an unmarked police car were at the scene which makes one wonder whether Baggot's claim to be under resourced isn't just a gimmick to squeeze more money from the public pot.  Any time I am stopped there would appear to be an abundance of resources on the ground.
As I stood on the road watching them going through personal documents, which they are not entitled to do under the legislation, I noted the interest being shown by passing motorists and pedestrians.  A crowd of onlookers stood at the entrance of the Felons watching the proceedings with an enquiring gaze.  Long gone are the days when people would stop to show their disapproval of such policing tactics, however, a few horns were sounded as a small gesture of solidarity.
Is there a growing tolerance within our communities for this type of policing?  Do people really believe that certain republicans deserve to be targeted by the state because of their political beliefs?  Felon setting is alive and well in some quarters.
Those who make excuses for political policing would do well to remember the not too distant past.  When the IRA was the nemesis of the British state thousands of republicans were imprisoned under emergency laws designed to crush dissent.  Under the guise of the international "War on Terror" laws protecting the human rights and civil liberties of citizens have been grossly undermined. 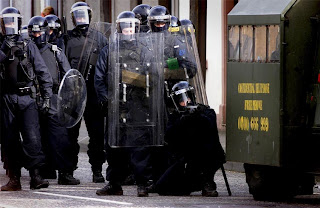 The RUC/PSNI has greater powers today than before the signing of the Good Friday Agreement.  Anti-terror legislation is so wide-ranging that Marion Price was re-imprisoned for "encouraging support for terrorism".  It is no longer necessary to commit an offense to find oneself in prison.  The repressive arm of the British state will be used to silence all who continue to swim against the tide of normalisation.

Beware of the wolf in sheep's clothing.
Posted by éirígí Sligeach at 4:26 PM