More than 120 people took part in a demonstration on Friday night outside the Clarion hotel in Sligo. The occasion was the annual dinner of Sligo Chamber at which the guest of honour was Brian Cowen. 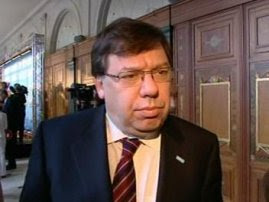 The demonstration had been called and organised by two local campaign groups. The Save Sligo's Cancer Services were protesting at the removal of Breast Cancer services from Sligo General Hospital to Galway last year and the ongoing cutbacks at Sligo General hospital.
The Sligo Workers Alliance (SWA) also held a protest opposing the savage cutbacks imposed on essential public services, including cutbacks at Sligo General hospital, as well cuts in workers pay and social welfare payments.
According to Brian O'Boyle, spokesperson for the SWA, they were there to highlight the fact that the people who had caused the economic crisis were still in charge and forcing the less well off to carry the burden. 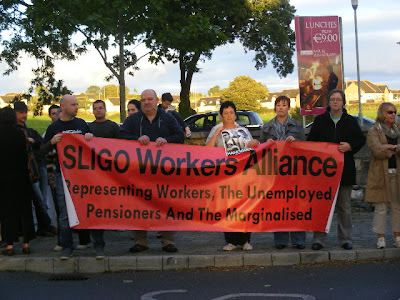 Despite requests from a variety of local community organisations who had sought a meeting with Cowen, all those requests were denied. Instead, the only engagements he took part in was a meeting with the Sligo Champion, one of the many newspapers owned by Tony O'Reilly's media empire, who are launching their newpaper in new tabloid format and his attendance at the Sligo Chamber's 5-star tuxedo dinner where Cowen wined and dined with business elite of Sligo.
Amongst those taking part in the protest was local éirígí activist Gerry Casey.
Speaking following the protest Casey said: “The fact that Cowen refused to meet with local community groups effected by the cutbacks imposed by his administration, yet was more than happy to help promote one of Tony O'Reilly's newspapers and attend a lavish banquet with the wealthy business elite of Sligo, shows exactly where his priorities lie.”
He added: “Cowen and his cronies care nothing for the suffering of local working class communities who he is forcing to pay for the economic crisis brought about by his policies and that of his administration. His only concern is with protecting the interests of the wealthy political and business elite and maintaining their lavish and extravagant lifestyles. The presence of so many 2010 Mercedes' at the Chamber dinner shows Cowen has done a fine job in protecting that wealth” 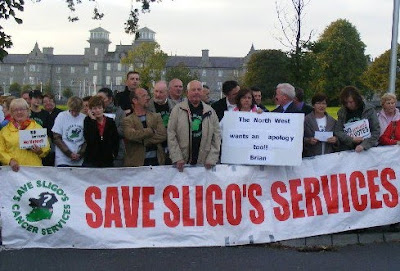 “On the other hand low paid workers and welfare recipients have already suffered immense hardship due to the extent of the savage cutbacks imposed over the past two years. They have suffered cuts in pay, welfare, child benefit, early childcare supplement, home help, school transport, school book schemes, the scrapping of the Christmas bonus and new prescription charges, all of which have had a hugely negative impact on their standard of living.”
He continued “Added to this is the impact that the carbon tax, subsequent increased fuel costs and the imminent ESB price hike has had on these families and which has lead to a sharp decline in the living standards of working people and has created widespread poverty. As we approach winter, the reality is that fuel poverty is set to increase dramatically and will ultimately result in more preventable illness and deaths, placing an even heavier burden on an already overburdened public health system that has been stripped to the bone and has suffered widespread slashing of essential services.” 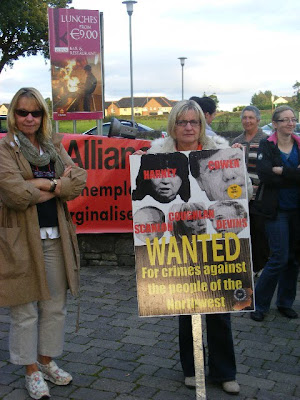 “As éirígí have repeatedly pointed out, none of these cutbacks are based on economic necessity. This administration has pumped tens of billions of euros into bailing out the banks at the same time as they deliberately slash essential health and education services and drive increasing numbers of families into extreme poverty.”
Casey concluded: “This is a fight that working class communities cannot afford to lose. Its long past time for these communities the length and breadth of this state to come together and organise effectively to drive these self serving politicians from power. More importantly however we need to dismantle and destroy their capitalist system which is based on greed before need and is responsible for the continued and increasing exploitation of workers, the ongoing drive to slash and privatise hospital services and the neglect of the most vulnerable in society who need assistance and care."
Posted by éirígí Sligeach at 11:00 AM No comments: Links to this post

Despite the appalling weather upwards of 100 people joined éirígí’s No Royal Visit protest outside of City Hall in Baile Átha Cliath last evening [September 6]. The City Councillors meeting inside the building were left in no doubt as to the mood and determination of those gathered outside, as chants of ‘Can you hear us loud and clear – British royals not welcome here’ reverberated around the precincts of City Hall and the adjoining Dublin Castle.
The protest followed on from a similar one at the last meeting of Dublin City Council on July 5. Click here for more on that protest. Both protests were called to coincide with a scheduled debate by the City Councillors on a motion opposing a state visit by Elizabeth Windsor. Last night the council again failed to debate the motion due to an overrun of other items on the agenda, including the Poolbeg Incinerator debate.

The wording of the motion which has been submitted by éirígí’s Councillor Louise Minihan reads “That this council notes with deep concern the proposal for a state visit to the Twenty Six Counties by the British head of state. Such a visit would be entirely inappropriate whilst the British state continues to implement imperialist policies and commit human rights abuses across the world, most notably in Afghanistan, Iraq and here in Ireland. This council calls on the Dublin government to abandon its plans to invite the British head of state to Ireland and on behalf of the proud citizens of this city we declare that Elizabeth Windsor is not welcome in Dublin.”
The motion will now be debated at a specially convened ‘motions’ meeting on Monday September 20th which deal with all the motions which were not heard at last night’s meeting. Speaking following the protest Cathaoirleach éirígí Brian Leeson confirmed that éirígí will again be organising a protest outside of City Hall to coincide with the meeting.

“On behalf of éirígí I would like to thank everyone that turned out to the protest. Tonight’s event was larger than the one in July, despite the appalling weather. Indeed, so bad was the weather we actually ended the protest earlier than planned. That scores of people were willing to come out to stand in such heavy rain shows the level of public opposition that there is to a Windsor state visit.
“On Saturday the people of Dublin and Ireland gave Tony Blair the welcome he rightly deserved, leading to the subsequent cancellation of his book signings in London. For those that doubt the value of such protests, Saturday proved that street politics can work and that protesters can achieve their objectives.

“We will be holding another public protest outside of City Hall when the anti-royal visit motion finally gets debated. I would ask everyone that has turned up to the last two occasions to make it their business to get to City Hall for that protest. And I would ask them to try and bring at least one other person with them. It is hugely important that these protests gather momentum.
“I have no doubt that a British royal visit can be stopped, but it will require people to get organised and get onto the streets. If you are opposed to the prospect of the head of Britain’s armed forces being paraded through the streets of Dublin and elsewhere, mark 6pm on September 20th in your diary and get to City Hall and make your voice heard.’

The next protest will take place at 6pm, Monday, September 20th at City Hall on Dublin’s Dame Street. All are welcome. Bígí linn.


If you are interested in joining or helping éirígí in Dublin, or anywhere in Ireland, please: Phone: 00353 (0) 86 236 72 98
or
Email: eirigimembership@gmail.com
Posted by éirígí Sligeach at 10:29 PM No comments: Links to this post