Sligo éirígí activist Gerry Casey has condemned the Fianna Fail led administration and the Health Service Executive (HSE) following revelations that Sligo General Hospital is to have its 2009 budget cut by seven million euro, while seven primary school teaching posts are to be lost at a number of schools throughout the county. 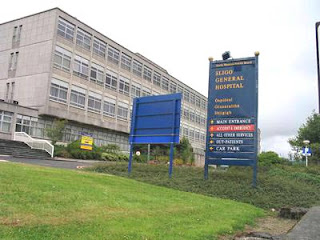 Responding to the Hospital Budget reduction Casey said: “These latest cutbacks are the actions of an administration that has failed completely the people that they claim to represent. This is yet another serious blow to already under-pressure services at Sligo General Hospital and to the people in need of those vital services.”

“This Fianna Fail led administration has repeatedly shown a callous disregard for the health and well being of the people of this region and they must reverse these cutbacks or resign from office. Peoples’ health must not be made suffer to pay for the greed of the politicians, developers and bankers that have squandered the wealth of the Celtic Tiger.”

“There is a clear and workable alternative. What is now needed more than ever is the building of a first class health service that is truly free and equal, paid for by direct taxation and that is based on medical need and not ability to pay.” 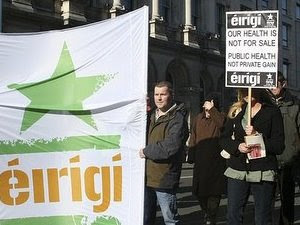 In relation to the cutbacks in Primary Schools throughout Sligo, Casey said: “The loss of seven teachers in primary schools in County Sligo is a direct result of the budget cutbacks announced last year. At the time, éirígí said that the measures, if implemented, would do untold damage to the education of our children for years to come, particularly the most disadvantaged and vulnerable.”

“Sadly this is now what is happening and children attending the schools affected will now see their education suffer. Those schools include St Edward’s, Carbury, Carraroe and the Mercy in the town, with schools in Ballymote, Castleknock and Cliffoney also affected.”

He concluded: “This administration’s vision for the future is one that witnesses parents of school children struggling to fund the education of their children, that sees their children in classrooms that are overcrowded in rundown schools or having to be sent home because there is nobody available to teach them. This is not éirígí’s vision and it is not the vision that parents have for the education of their children. Education is a right – not a privilege to be granted one moment and snatched away the next. They must reverse the education cuts in their entirety.
Posted by éirígí Sligeach at 10:05 PM No comments: Links to this post

éirígí concerned over possible withdrawal of Rheumatology services in Manorhamilton

éirígí activist Gerry Casey has expressed "grave concern" at media reports that the health Service Executive (HSE) are set to remove Rheumatology sevices from Our Lady's Hospital in Manorhamilton.

Casey said: "The HSE's record in downgrading and removing services from Our Lady's Hospital, the removal of endoscopy services being the most recent, has been a matter of concern for the people of north Leitrim for some time now."

He added: "Their refusal to deny these reports only serve to increase concerns raised in recent weeks that they do intend to remove rheumatology services from Our Lady's. Such a move would be a retrograde step and a further blow for the hospital and the people served by it."

He concluded: "Yet again, north Leitrim looks set to suffer at the hands of a so called health service that has shown a callous disregard for the health and well being of the people of this region and of the state in general. They appear more intent on implementing the right wing policies of privatisation and two-tier health services of their political masters rather than creating a first class health service available and accessible to all."

Posted by éirígí Sligeach at 11:06 PM No comments: Links to this post

éirígí accuses MacSharry of getting his priorities wrong

Sligo éirígí activist Gerry Casey has accused Fianna Fail Senator Marc MacSharry of getting his priorities all wrong. He claimed that McSharry would be better off defending the rights and the living standards of workers currently being scapegoated by his party rather than feigning mock outrage at accusations of Fianna Fail's links to corruption and golden circles.

Casey was responding to a speech made by MacSharry in the Seanad on Thursday night where he expressed outrage over allegations that the Fianna Fail led administration were protecting the 10 Golden Circle Anglo Irish investors.

Casey said: "MacSharry has got his priorities all wrong. The reality is that the current recession and economic crisis is a direct result of the failed policies of MacSharry's party and the greed fuelled actions of their banker, broker and developer friends. Fianna Fail allowed the potential long term benefits of the Celtic Tiger to be pilfered by a small class of already extremely wealthy people." 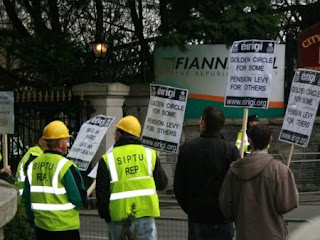 He added: "Yet now Fianna Fail are forcing the workers who created, but did not benefit from, the wealth of the Celtic Tiger to carry the burden. While the Fianna Fail led administration are offering billions of euro of public money to bail out the banks, they are forcing workers to take pay cuts, while tens of thousands are being forced onto the dole like used commodities. At the same time the identities of the golden circle at Anglo Irish remain protected despite MacSharry's protestations."

He concluded: "MacSharry needs to get his priorities right. Rather than feigning mock outrage at these accusations over the Golden Circle and Fianna Fail's links to them, MacSharry should be demanding that his party stop attacking the rights and living standards of workers who are already suffering hardship as a result of last years savage budget cutbacks. His outrage would be better directed at those within his own party who have allowed through successive administrations the wealth of the Celtic Tiger to be squandered and who have allowed corruption to flourish and go unpunished in recent decades. He should also be demanding that the identities of those who make up the Golden Circle at Anglo Irish be made public."
Posted by éirígí Sligeach at 6:41 PM Links to this post