Below is the first in a series of articles relating to social welfare within the twenty six counties. Amongst the specific issues dealt with will be cutbacks, 'fraud' and the broken promises and hypocrisy of the Fine Gael/Labour coalition less than 100 days after taking office
A recurring (and generally unchallenged) theme that emanates from the political and media establishment is the notion of widespread social welfare 'fraud'.
If we were to take at face value the claims of politicians, employers groups, right wing economists, journalists and commentators, the cost to the state is colossal. If we were to believe them, there would have been no need for social welfare cutbacks in the first place if it wasn't for this 'fraud'.
Over the past week as the Social Welfare & Pensions Bill 2011 has been debated in Leinster House, speaker after speaker from the Fine Gael/Labour coalition made reference to this 'fraud'. Minister for Social Protection Labour's Joan Burton (above)  said that “every euro saved on fraud is money that could be given to legitimate social welfare beneficiaries and to pensioners who need income support.”
While Fine Gael TD Patrick O Donovan was preparing the ground to justify another U-Turn by his party with more social welfare cuts by saying that “if the area of social welfare fraud was adequately tackled it would be possible to leave social welfare rates as they are.”
It is an appalling but clever tactic to avert the gaze of people from the true causes of the economic crisis and the savage cutbacks that are causing so much hardship and poverty. It is a long established deliberate attempt to paint an image in the public mind of every social welfare recipient as being somehow a 'sponger' that doesn't want to work or a downright 'fraudster'. This is then used to justify cutting social welfare rates, pushing people even further into poverty. 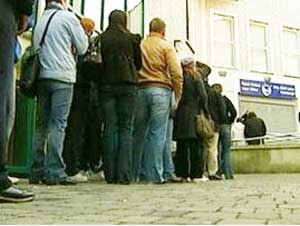 The media, as on so many other issues, are willing accomplices in keeping this narrative of 'widespread fraud' circulating while refusing to properly question or analyse the accuracy of the claims being made. But is there the widespread 'fraud' they suggest or is it a different kind of fraud and deception, one directed by the politicians in Leinster House and the Department of Social Protection itself?
For example, a recent article in the Donegal News (June 2) entitled “Over €6 million detected in social welfare fraud” quotes the Department of Social Protection as saying that these 'savings' resulted from anti-fraud measures and reviews carried out by welfare offices and inspectors. Such newspaper articles and tv programmes such as the recent TV3 documentary and the RTE Prime Time programme in the run up to the Budget in 2009 when welfare cuts were to be first introduced are commonplace in highlighting this supposed widespread 'fraud'.

There are a number of problems with assuming that all this, or even a significant amount of it, is fraud related. What the department, or the media, doesn't tell you is how many of these people will in all likelihood have their payment returned to them following appeal. In other words they don't tell you how many of them have had their payment stopped unfairly in the first place.
They don't tell you how this will impact on people who are already struggling to survive on pitiful social welfare rates. They don't tell you the hoops these people are forced to jump through and the lengthy delays they will endure to eventually get what they were entitled to all along.
Closer analysis of the Departments claims of fraud and fraud detection tell a very different story to the official narrative.
Over the past decade, of those who have had their welfare benefits withdrawn, cut or refused in the first place, every year between 40% and 50% of those who appeal that decision have those decisions overturned in their favour.
In other words, the fraud and deception taking place is that by those in government trying to portray these people as fraudsters when in fact it was the department of social protection defrauding those people entitled to their benefits. In 2003, the numbers of those who appealed that won their cases was 44%. By 2009 the numbers had risen steadily year in year out to 48%.
Successful Social Welfare Appeals 2003 – 2009 (%)
2009 - 48%
2008 - 47%
2007 - 47%
2006 - 46%
2005 - 47%
2004 - 46.5%
2003 - 44%
This is clear evidence of something fundamentally rotten with a system that year after year gets virtually 50% of such potentially life changing decisions wrong. Yet year after year the only 'reforms' we see implemented are those that make it harder for people in need of and entitled to benefits to secure those benefits.
Many of those who initially have their claims refused or cut do not appeal the decisions for a variety of reasons. In many instances people believe that having been refused that they are not entitled to their payment even though in reality they are.
Between 10 and 15% of those who appeal withdraw that appeal before it is heard. Not surprising considering social welfare appeals can take anywhere between six and twelve months to be heard.
For many people, their circumstances will have changed. For many others, it is the final straw. Fed up and in financial difficulties as a result of being unemployed yet being denied their entitlements many have opted for emigration, a situation that the department and the government as a whole wont lose any sleep over.
The reality is that the vast vast majority of people on social welfare would much prefer to have a job despite the best efforts of the political and media classes to suggest otherwise. During last weeks debate a Fine Gael TD Andrew Doyle said that the government needed to “give people an incentive to stop relying on social welfare.”


The clear implication of that is that people are on welfare either by choice or due to lack of motivation or 'incentive' to find themselves a job. It is part of a pattern by the political and media classes to demonise those forced onto social welfare through no fault of their own, and to justify cutting welfare rates and benefits. It is also complete nonsense as there are no jobs out there for people to be “incentivised” to secure, as more than 460,000 unemployed people can attest to.
The statistics for employment growth and long term unemployment also expose the lies that the unemployed don't want to work or need to be pushed and cajoled into taking up employment. Throughout the 'celtic tiger' era, from the mid-nineties right through to 2007, employment grew annually here in the twenty six counties. At the same time long-term unemployment fell to very low levels and remained at those low levels right up until 2007.
More recently, throughout 2009 and 2010 growth in employment plummeted. As a result long term unemployment has soared to record highs in those years. What it reveals is that when there are jobs for people to take up, they will do so  No amount of 'incentives' or intimidation from the department can make people take up jobs that just do not exist.

High unemployment has nothing nothing to do with people being lazy and not wanting to work. It has to do with a lack of jobs. But should we be surprised at the successive governments and the media promoting this notion of 'laziness' and 'fraud'? Of course not. It suits them to put the blame for unemployment on those unfortunate enough to lose their jobs rather than those who are actually responsible for the job losses and unemployment crisis – the politicians themselves.
Before the recent general election, Fine Gael and Labour promised us all real change from the politics of Fianna Fáil who had held the reigns of power for more than a decade. Less than 100 days into office, it is crystal clear that the Fine Gael/Labour coalition are more than happy to jettison their pre-election promises.
They are proceeding along the same path as that of their predecessors in Fianna Fáil, bowing to their masters in the IMF and ECB, scapegoating and targeting low paid workers and social welfare recipients, while protecting the assets of the wealthy. The agenda remains the same. All that the general election has changed is the names and faces implementing it.
Posted by éirígí Sligeach at 11:30 AM