éirígí chairperson Brian Leeson has commended all those who attended Saturday's demonstrations against the British government's plans to interrogate people for 42-days without charge or trial.

Held on the 37th anniversary of the introduction of internment in the Six Counties, the protests were aimed at the 42-day detention legislation which was passed by the British parliament in June this year.

éirígí activists and supporters gathered at various locations to include Dublin's British embassy, Lurgan town centre, RUC-PSNI Barracks in Antrim town, Belfast and Enniskillen. Amongst those in attendance at Saturdays protest in Enniskillen were Republicans from Counties Sligo and Leitrim. 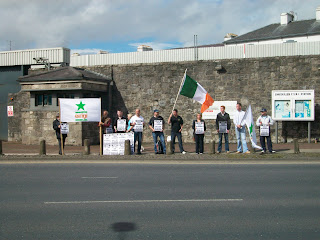 Speaking after the well-attended events, Leeson said: "August 9 1971 was a seminal date in modern Irish history. As hundreds of innocent people were being carted off to torture centres and onto prison camps, hopes that Britain and its forces could play a benign or impartial role in Irish affairs once again went up in smoke.

"Despite the fact that the British government's attempts to contain the insurgency in the Six Counties through the use of internment without trial were utterly unsuccessful, they are today pressing ahead with legislation which is internment by another name. Clearly, London has yet to learn its lesson with regard to denying people their legal rights."

Brian continued: "It is worrying that the passing of the 42-day detention legislation has met with little comment in Ireland, especially given Britain's record in this country. While Gordon Brown's administration has used the spectre of 'islamic fundamentalism' to hold innocent people for so long without charge or trail, there is little doubt that, given the opportunity, they will use the legislation against Irish republicans and vulnerable communities in Britain.

Fermanagh activist, Kevin Martin stated, "All those who turned out in Enniskillen are to be commended for breaking the silence on this issue. They made it clear that the best way to remember the massive injustice that was internment is to challenge Britain's modern day plans to lock people up without charge or trial."
Posted by éirígí Sligeach at 5:57 PM Links to this post