'Fracking' is a term that not everyone may be aware of. It is used to describe a method of shale gas extraction known as Hydraulic Fracturing.  Unfortunately it is a term we are very likely to hear a lot more about in the coming months and years.
The dangers that this procedure poses to the environment, to water quality and to human safety is well documented worldwide. France has recently banned the use of fracking as have a number of regions in the United States. In Lancashire in England, fracking has been halted in recent weeks following a series of earthquakes that occurred and are believed to be linked to the recent exploration activity using this method in that region.

In the dying days of the Fianna Fáil led administration back in February of this year, one of their final acts was to award licences to a number of companies to explore for commercial gas in the Northwest Carboniferous Basin (more commonly known as the Lough Allen basin) and the Clare basin. The Lough Allen Basin is a huge area that covers parts of counties Cavan, Donegal, Fermanagh, Leitrim, Mayo, Monaghan, Roscommon, Sligo and Tyrone. It covers an area of 8000 square kilometres in total. The Clare basin encompasses parts of Counties Clare, Cork, Kerry and Limerick.
Awarding the licences the then Minister of Natural Resources Conor Lenihan awarded licences to two companies to begin exploration in the Lough Allen basin – Australian company Tamboran Resources and the Irish Lough Allen Natural Gas Company. Enegi Oil Plc was awarded the licence to begin exploration in the Clare Basin.
Last April when Lenihan first invited applications for licences to explore for natural gas in these areas, éirígí warned of the potential dangers that lay in store if this exploration and drilling was allowed proceed without meaningful consultation and the consent of communities effected.
Responding to Lenihan at the time (click here to read article) éirígí Sligeach activist Gerry Casey said that “such exploration and extraction has the potential for grave environmental damage and danger to human health and safety. We have seen in north Mayo the conflict that can arise when such developments, with the potential risks involved, are imposed on local communities. Once again in these instances, there has been no proper in-depth consultation with local communities who may be effected by this prospecting and possible extraction of gas.”
He added: “If our natural resources are to be exploited, then it needs to be done in consultation with local communities, in a manner that protects the environment and protects peoples health and safety. To date, the record of the political establishment and of the exploration companies, as exemplified in the ongoing dispute over Shell's planned pipeline in north Mayo, on environmental and safety issues does not breed confidence.”
Claims by the Department of Communications, Energy and Natural Resources who now say that fracking would not be allowed in the Lough Allen basin without a public consultation phase and an environmental impact assessment should be treated with contempt.
Indeed, both companies involved in the Lough Allen basin exploration have already confirmed that fracking is their intended method to extract gas from this region. So much for consultation!
One need only look at the example of Shell's pipeline in north Mayo to see how the department deliberately ignored the dangers to human safety and the environment, ignored deliberate breaches of the law and environmental regulations by Shell and never held any meaningful consultation with the local community.
Instead, they ignored their legitimate concerns, tried to demonise and criminalise them and then sent the Gardai in to intimidate and beat them into submission when they realised they could not be duped or bought off.
The whole Corrib gas saga is proof of how environmental regulation in this state does not work and cannot be relied upon to protect citizens from large oil and gas companies whose only concern is profit.
As in the Corrib case, any gas extracted in the Lough Allen or Clare basins will be of no benefit to the public, the rightful owners of this natural gas. Once again the shareholders of private companies will benefit from this at our expense. 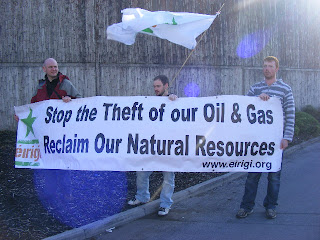 As the start of exploration in the region is imminent éirígí activist Gerry Casey said that the whole process needs to be stopped immediately.
He said: “There has been no consultation with the local communities effected and no consent given by them to this project. This whole process needs to be stopped immediately and the use of fracking banned before any damage can be done.”
“Genuine and in depth consultation must be held with the people in these regions. If the gas can be extracted safely without any threat to the environment and public health, then and only then, it should be extracted to benefit the people of the region and the island as a whole, not to boost profits for private companies.”
Casey added: “All our natural resources must be nationalised and extracted safely where possible. The vast wealth that could be generated would go a long way towards creating well resourced and efficient public services in areas such as Health and Education. It would provide long term funding to create sustainable long term employment and help to eradicate the scourge of fuel poverty and poverty in general.”
“If Fine Gael and Labour think that people will roll over and just accept the current situation they are sadly mistaken. If they insist on continuing this process they will meet fierce resistance, just as Shell and the government have faced for the past ten years in north Mayo.”
In recent weeks Cinema North West have been holding public showings of the award winning US documentary 'Gasland' which exposed the dangers of the fracking process throughout the US. Their next screening takes place next Thursday night (June 23) at 8PM in their mobile cinema beside the Coach House Hotel in Ballymote, Co Sligo. (Click here for more details)
Posted by éirígí Sligeach at 10:52 AM