Thousands of people took to the streets of the border town of Lifford in County Donegal on Sunday (May 23) for a march and rally opposing HSE plans to shut Lifford Community Hospital. In sweltering heat, the large crowd assembled at the grounds of the threatened hospital before marching to the Diamond in the town.

Amongst those who addressed the Rally at the Diamond were representatives of the Save Lifford Hospital group, local clergy and political representatives as well as speakers from IMPACT, SIPTU and the INMO trade unions. 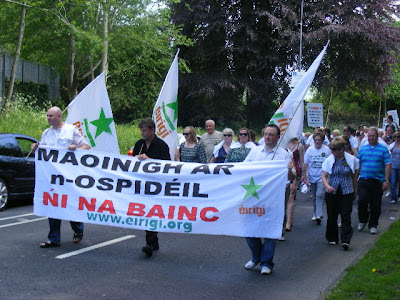 Speaking after the rally, éirígí Tír Chonaill spokesperson Micheál Cholm MacGiolla Easbuig who had taken part in the march with other éirígí activists, said that the demonstration sent a loud message to the HSE and their political masters in Leinster House, that the hospital is not for closing, and that they must fund our hospitals instead of the banks. 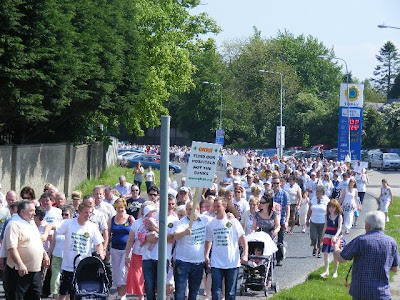 MacGiolla Easbuig said: “This Fianna Fáil led administration are systematically dismantling and destroying the public health service. Not only must their savage cutbacks be reversed, but our hospitals and the essential services they provide must be upgraded and provided with the necessary staff and resources so sadly lacking at present.” 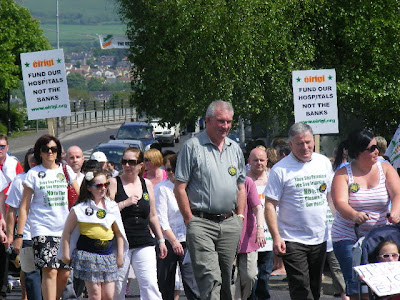 He added: “There is a a general policy of slash and burn by Fianna Fáil and the Green party towards public health services in this country. Hospitals are being downgraded and shut down completely. Services are being reduced and moved further away from local communities. There are ward closures, bed removals, staff reductions and cuts in home help to highlight just a some of the outrageous and unjust cutbacks being imposed.” 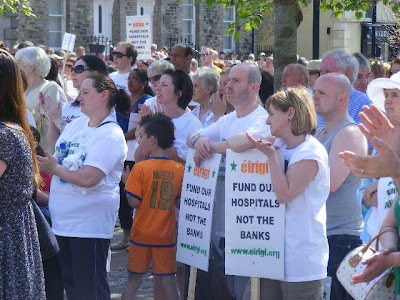 “Make no mistake, the future of Lifford Community hospital is under serious threat. If we are to prevent its closure, then people power is the only way to do it. Todays march and rally was an excellent start but the momentum now needs to be maintained and intensified on the streets.” 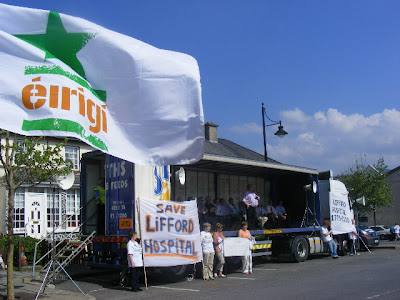 MacGiolla Easbuig concluded: “The thousands of people who marched through Lifford today sent a loud and clear message to Fianna Fáil and the HSE. That message is to fund our hospitals, not the banks. As a community we have had enough of these savage health cuts and the closure or reduction of sevices in Lifford hospital will not be tolerated. We deserve a first class health service easily accessible and available to all based on a persons medical need, not their wealth.”

Posted by éirígí Sligeach at 12:38 AM