The article below is reproduced courtesy of Sligo Today


Who's taking the Queens shilling - It would appear that an Irish FÁS sponsored unemployment advisory office is now acting as a Recruiting Office for Her Majesty's Armed Forces.

The Millennium Jobs Club based in the Watch House Cross Shopping Centre in Limerick, whose letterhead has the FÁS logo along with the National Development Plan logo endorsing it's activities, has been advising jobseekers that there are 'many careers on offer' in today's British Army.

It fails however to advise that a new overseas military career could put the applicants directly in harms way as the British Army is currently fighting a war on two high-profile fronts, Iraq and Afghanistan. There are also many worldwide covert active service 'hot spots' enjoying the presence of the soldiers. In both primary theatres of conflict many deaths and serious casualties are being recorded on a daily basis.

The Limerick Jobs Club also omitted to inform any applicants that it's recruitment policy is illegal and that under the current Irish law stiff penalties could be imposed for attempting to recruit Irish nationals, in Ireland, for a foreign army.

The letter, dated 19th April 2010, to an job seeker enquirer is reproduced below. The addressee's name has been removed.

Several members of the regiment have been 'upgraded' to MI5 status and have been assigned to the spooks HQ, Palace Barracks in Belfast, where over 400 agents are currently based.

éirígí Sligeach activist Gerry Casey said “That Fás believe it is appropriate or justifiable to target the unemployed in this country by becoming recruiters for the British army is appalling.”

“This is an organisation responsible for the slaughter of thousands upon thousands of civilians in Iraq, Afghanistan and here in Ireland. They continue to occupy part of our country. British troops, including undercover troops from the Special Reconnaissance Regiment, a sister regiment of the SAS, have been involved in military operations just across the border in Garrison in Co Fermanagh and in Derry in recent months.”

“The skies above Fermanagh and Tyrone are being used by them to train their pilots for their war in Afghanistan which has resulted in the widespread slaughter of innocent Afghan civilians.”

“Recruiting cannon fodder for foreign armies, no more than emigration, is not a solution to our unemployment crisis. While it may suit the Dublin government to see young Irish people squeezed by job losses and then dole cuts to emigrate or enlist to kill and be killed in the imperialist adventures of foreign armies, Fás must immediately cease their role as recruiters and propagandists for the British army murder machine.” 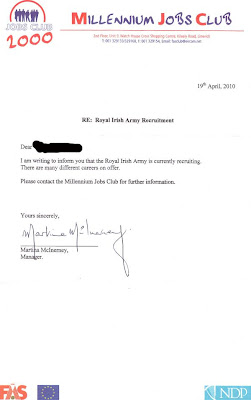 Posted by éirígí Sligeach at 11:17 AM