RIR Stunts Will Be Opposed

éirígí candidate for the Lower Falls in the forthcoming local government elections in the Six Counties John McCusker has said any attempt by the British army to hold a parade in Belfast will be actively opposed by the socialist republican party.

The British Ministry of Defence recently announced that they plan to parade soldiers from the Royal Irish Regiment through the streets of the Six Counties when they return from the war against Afghanistan in May.

In 2008, hundreds of people attended an éirígí demonstration in opposition to an RIR parade through Belfast city centre.
McCusker said: “The Royal Irish Regiment is about as welcome in Ireland as it is in Afghanistan, which is not very welcome at all.

“If the British Ministry of Defence thinks it can march the RIR through the streets of Belfast without facing opposition then it is gravely mistaken; it should have learnt its lesson in 2008.

“The British army is an army of occupation.  In both Afghanistan and Ireland, it acts as the military enforcer of the diktats and interests of foreign politicians and business interests.  It has no positive role to play in either
country.” 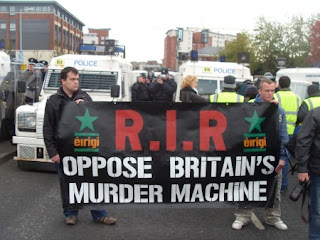 McCusker added: “At a time when Britain is involved in its latest imperialist offensive, this time against the people of Libya, it is even more incumbent that the glorification of these mass murderers is opposed at every turn.

“éirígí will be actively opposing any British army propaganda stunt that involves the parading of killers in uniform through Irish streets.  We call on all republicans, socialists and democrats to do likewise.”
Posted by éirígí Sligeach at 3:03 PM