Sligo éirígí activist Gerry Casey has expressed his disappointment at the Lisbon Treaty referendum outcome saying that the Fianna Fáil led administration will take it as a green light for intensifying their ongoing attacks on workers rights and living standards. He also claimed that the referendum campaign has exposed the myth that Fine Gael or Labour presented an alternative to Fianna Fáil when it comes to the economy and the cutbacks being imposed on the people of this state.

Casey said: "This result is good news for big business and the political elite but more bad news for workers and those less well off in our society. This result gives a green light to the Fianna Fáil led administration to continue and intensify their attacks on workers pay and employment conditions. It gives them a green light to proceed with the bail out of the banks and developers, through NAMA, while they impose further cutbacks in social welfare and essential public services such as health and education." 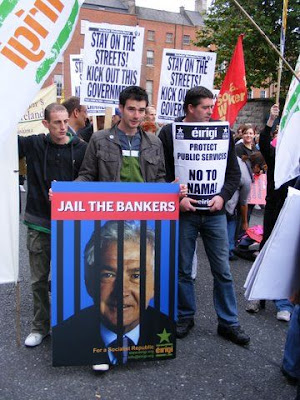 In relation to Fine Gael and Labour support for Lisbon and the economic policies enshrined within the Treaty, Casey said: "Despite the petty squabbling in public and across the chamber in Leinster House between Fianna Fáil and the so-called 'opposition' of Fine Gael and Labour, this referendum campaign has exposed the myth that these 'opposition' parties represent an alternative to the present administration. The reality is that when it comes to the economy there is no substantial difference between any of these parties as they are two sides of the same coin."

He added: " By engaging in a united front with Fianna Fáil in supporting Lisbon, Fine Gael and Labour have signed up to the very economic policies enshrined in the Treaty that created the economic wasteland that we are currently in. They have signed up to the economic policies that created this recession, which sees up to half a million people unemployed, sees ongoing attacks on workers rights and living standards and has resulted in severe cutbacks in our health and education services."

"Instead of offering an alternative to Fianna Fáil, the so-called 'opposition' offer nothing but more of the same discredited right wing, greed before need, unbridled capitalism that has led us into this crisis. By supporting this government and ensuring that it remains in power by supporting Lisbon, Fine Gael and Labour have betrayed the very people they claim to represent. They too will now share responsibility for the implementation of NAMA and the cutbacks that are imminent." 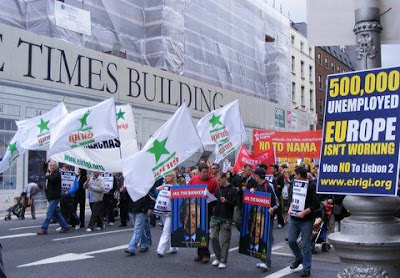 He concluded: "For our part, éirígí will continue to oppose the current economic policies being imposed and supported by the political and business establishment. We will continue to defend the rights of workers and to defend essential public services from further attack. While Irish workers may have lost this battle in terms of Lisbon, the struggle is far from over. Now, more than ever, it is imperative that workers take to the streets in larger than ever numbers to protect their rights and livings standards and to resist the imminent McCarthy report, taxation commission report and budget cutbacks."
Posted by éirígí Sligeach at 6:32 PM