Brown Not Welcome - – Britain Out of Ireland

Belfast éirígí activists this morning [Monday] erected a number of banners in the city to mark the presence of British prime minister Gordon Brown in occupied Ireland.

The banners, bearing the message 'Brown Not Welcome – Britain Out of Ireland', were unveiled at different prominent points in the city, in full view of rush hour traffic. 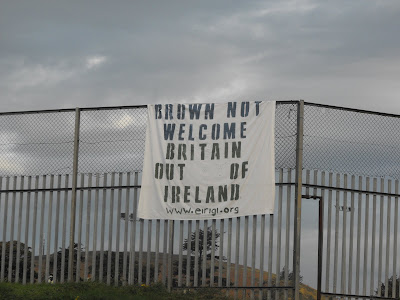 éirígí general secretary Breandán MacCionnaith said: "It has become increasingly clear this year that the British government’s attitude towards Ireland remains what it always was. Plastic bullets have been fired indiscriminately at civilians, 28-day detention has been implemented and the British army’s Special Reconnaissance Regiment is officially operating in the North."

MacCionnaith continued: "The nationalist parties at Stormont must now recognise the mess they have got themselves into. The British prime minister was able to fly into Belfast this morning and portray himself as the impartial arbiter in a dispute between bickering natives, with the approval of a substantial section of those who are supposed to be opposing Britain’s presence here."

“"Even in the event that some policing and justice responsibilities are handed to the Stormont administration, real power will continue to lie in Downing Street, Whitehall and Westminster. This is not an exercise in democracy, it is the fine tuning of the British occupation."

“"Stormont politicking and appealing to the good will of British prime ministers is a dead end. The real solution lies in the building of a mass movement that will actively oppose the British occupation. éirígí is fully committed to that task.”"
Posted by éirígí Sligeach at 5:26 PM