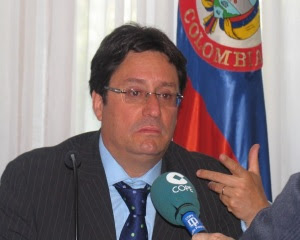 Calderón was here to address a PSNI-run drugs conference on the issue of the cocaine trade and how to combat it. Unfortunately, the senior Colombian politico was not expected to address the involvement of the right-wing death squads in the trade and their dubious relationship with his government.

According to the European Union, Colombia is designated as a developing country.

Over the years, as a result of this classification, under a scheme entitled the General System of Preferences (GSP), Colombia has received preferential trading status with the EU. This scheme and the special benefits that apply and which Colombia is in receipt of are intended solely for countries that respect certain basic human rights and the rights of workers.

Back in 2005 the scheme was altered to a new system entitled GSP Plus, which delivers extra benefits for qualifying countries. However, the new system significantly required those qualifying countries to not just ratify a number of core international conventions on labour rights and human rights, but, more importantly, to also “effectively implement” these international conventions. Among the rights enshrined in these conventions are the right to protection to organise and collective bargaining, as well as the right to freedom of association.

So, while the Colombian regime has indeed ratified the necessary conventions, they have failed to implement them effectively and, in fact, they consistently and regularly breach these and other International Labour Organisation (ILO) conventions as a matter of course. Indeed, all the evidence clearly shows that they actively engage in measures, both directly and indirectly through their allies in the right-wing death squads, to hamper the work of trade union activists and to intimidate, disappear, torture and murder those engaged in trade union activity as well as other human rights activists and political opponents. Trade union membership numbers have plummeted in recent decades to just 850,000, just 5 per cent of the total workforce and just half of what union membership figures were 20-years-ago.

For trade unionists, Colombia remains the most dangerous place in the world. An Amnesty International report issued in July of last year highlighted the fact that, during the past two decades, over 2,000 trade union activists have been killed (the figure stands at 2,683 in the last 22 years), while 138 have been the victims of enforced disappearance in Colombia. In more than 90 per cent of these cases, the people responsible for these atrocities have yet to be brought to justice.

In stark contrast to the image presented to the world by the Colombian regime and its US and British allies, the situation has not improved and violence in Colombia has increased dramatically throughout 2008. From January 1 this year up until the end of August, 40 trade unionists were murdered, a figure already higher than the numbers for the entire year of 2007. Among those activists murdered were 15 trade union leaders. Over the past decade, the number of trade unionists killed in Colombia has been consistently greater than those killed in all other countries worldwide combined.

Added to that is the extremely worrying fact that 125 death threats were issued against trade unionists trying to carry out their activity in the workplace throughout Colombia this year alone. Considering the propensity of those issuing the death threats to murder or disappear those that they threaten, those figures are a real source of concern for Colombian trade unionists and should be of major concern for the EU and those who decide what countries are to awarded GSP Plus status.

No more state crimes!Human rights groups have shown that, during the current president’s six-year period in office, the Colombian military has been responsible for the extrajudicial executions of around 1,200 civilians, a figure that is almost twice the number killed in the period between 1996 and 2002.

Amnesty International’s latest report, entitled Leave Us in Peace! - Targeting Civilians in Colombia’s Internal Armed Conflict, again documents an increase in the numbers of civilians killed by the Colombian military and calls for an end to all military aid to the regime. Among the many Colombian military units for which there is clear evidence of involvement in torture, murder and other human rights abuses are units who receive British government and British military assistance, the notorious High Mountain Battalions of the Colombian Army. The report also documents a significant upward surge in attacks against human rights and trade union activists and increases in the forced disappearances and forced displacement of civilians by the regime.

That such a regime, with such an appalling human rights record, should be rewarded with special status by the EU is appalling and should not be allowed to continue.

The position of countries that have GSP status is currently under review and a decision will be announced by the EU Commission on December 15. It is imperative that the EU does not renew Colombia’s special trade status. Instead, they should, as has been called for by the CUT trade union federation, the largest union organisation in Colombia, initiate a high-level and thorough investigation into the murder campaign and human rights abuses carried out by the regime and its allies against trade unionists, human rights activists and political opponents.
Posted by éirígí Sligeach at 7:49 PM