The proposal to use the widely discredited public private partnership scheme to build a new school premises for Coláiste Ailigh in Letterkenny has been condemned by éirígí.  Building of the school, which is intended to provide accommodation for 350 pupils, is expected to get under-way in 2012.

Under the Public Private Partnership scheme, new schools will be designed, built, financed and maintained for 25 years by which ever private company is successful in obtaining the tender for each school. The school in turn will then be rented back from that private company by the government during that time.
Criticising the scheme, éirígí spokesperson in Donegal, Micheál Cholm Mac Giolla Easbuig said, “While we would always welcome the building of new schools as a positive step, the manner in which this is being proposed by the Fianna Fáil/Green Party government and Taniaste and Education Minister Mary Coughlan, must be utterly condemned.” 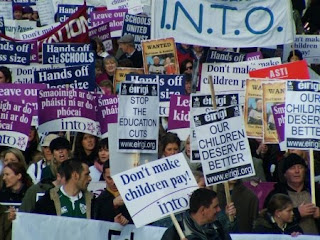 He added:  “Allowing private business to profit from the education of our children is an outrageous proposal. It should also be recalled that that a report from the Comptroller Auditor General found that schools built and operated through Public Private Partnership schemes can cost up to 13% more than schools provided through the conventional method. I would therefore question the rationale for this scheme and demand public answers from Mary Coughlan as to how she can justify a scheme that will end up costing the tax payer more and allow private business profit from the education of our children.

Micheál went on to comment, “Unfortunately, this proposal represents yet another step in the government's plan to use the current economic crisis to sell off and privatise state assets. We only have to look at the privatisation within our health service for evidence of the disastrous consequences of privatisation. Private business controls many aspects of the health service, from care of our elderly, to hospital car parks and cleaning. All matters which should be under the public ownership and all of which have been issues of concern in recent times here in Donegal.”
In conclusion Micheál called on the trade union movement to actively oppose this latest attack on public services and for the public to stand up and defend our schools, hospitals and state assets from the hands of private profiteers.   "Together we must actively oppose these latest proposals and fight to keep our children's education out of the hands to those whose only interest is profit'' he said.
Posted by éirígí Sligeach at 1:04 PM