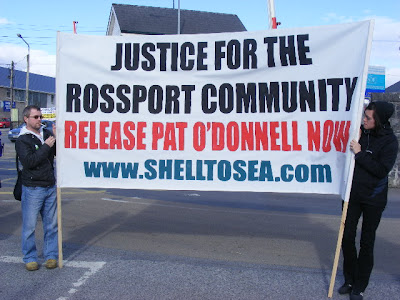 He was speaking following a national demonstration held outside Castlerea prison on Saturday in support of Pat O'Donnell. Among the large attendance were éirígí activists from around the country. 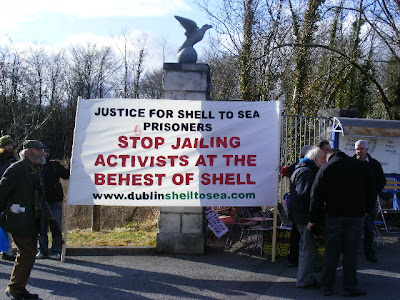 The demonstration commenced at the entrance to the prison where activists and supporters had gethered. Following some traditional music played by friends and neighbours of Pat's from Erris, including Vincent McGrath of the Rossport five, and a short address by Shell to Sea campaigner Maura Harrington, those assembled marched up to the prison gates. 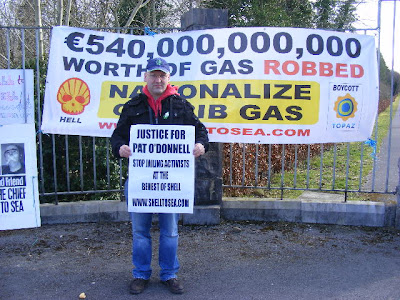 At the gates of the jail, Maura once again addressed the crowd calling for the release of Pat O'Donnell and an end to the giveaway of our natural resources. The large crowd also displayed banners and placards and chanted slogans calling for Pat's release before marching back down the road to the entrance of the prison once more.

Sligo éirígí activist Gerry Casey, who took part in the demonstration, said: "The jailing of O’Donnell is yet another attempt to criminalise an entire community in north Mayo and all those willing to stand up to the might of Shell Oil. Other prominent Shell to Sea campaigners, such as Maura Harrington, have been regularly intimidated, beaten, dragged before the courts on bogus charges and jailed as the state bends over backwards to do Shell's bidding.” 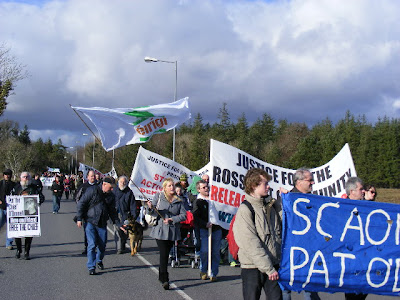 He added: “O'Donnell should never have been jailed in the first place and must be released immediately. His continued imprisonment is a gross miscarraige of justice.” 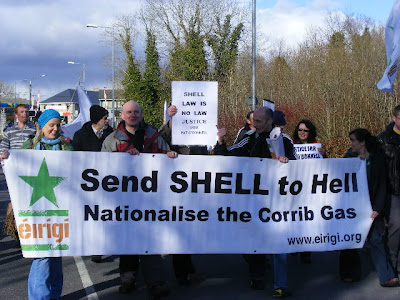 “The recent ruling from An Bord Pleanala has vindicated Pat and those other campaigners who all along claimed that this pipeline was unsafe and a major threat to the community in the Rossport area. This pipeline must be stopped immediately, the Corrib gas must be nationalised and the gas refined at sea, in line with international best practice. That is the only viable solution to this dispute.”

“This Fianna Fáil led coalition has already overseen mass unemployment and widespread cutbacks in social welfare, child benefit, pay and in our health and education services. Yet they are giving away billions of euros worth of natural resources, massive wealth which could be utilised to generate employment, eradicate poverty, create efficient health and education services accessible to all and increase living standards for workers.” 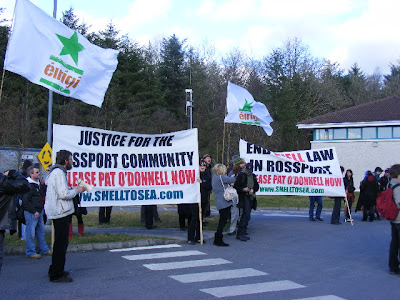 He concluded: “These resources must now be taken under public control. They must be used to create a better, fairer society instead of creating profits for Shell and those such as Sligo/North Leitrim Fianna Fáil TD Jimmy Devins who hold shares in companies with a major stake in Shell.” 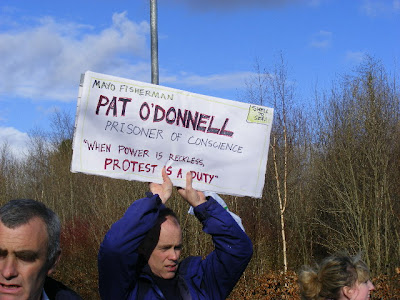 For more photographs from Saturday's demonstration click here
Posted by éirígí Sligeach at 2:55 AM