No compromise with cutbacks north and south

More than 5000 people marched through the streets of Sligo on Friday (Nov 6) as part of the Irish Congress of Trade Unions (ICTU) Day of Action. Sligo's demonstration was one of a series of marches organised on both sides of the border by the Irish Congress of Trade Unions (ICTU) to campaign against cutbacks in pay and essential public services being imposed by both the Dublin and Stormont administrations. 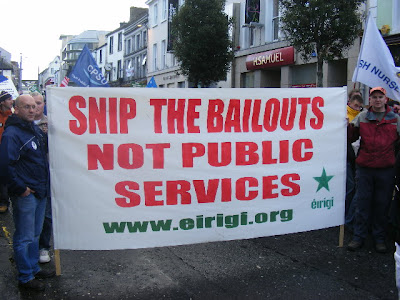 The march commenced from the Blue Lagoon at the Riverside and made its way across the Garavogue river to meet up with a second group of marchers at the Mall. It then proceeded through Bridge Street and Castle Street, ending up in O'Connell Street where a series of speeches were delivered to the thousands of workers and unemployed people assembled. Amongst those who addressed the crowd were Richie Carruthers (IMPACT), Ciaran Campbell (MANDATE), John McCarrick (SIPTU) and Ann McGowan (INO). Sligo woman Denise Curran, a worker in the private retail sector and a member of Mandate addressed the demonstration also. 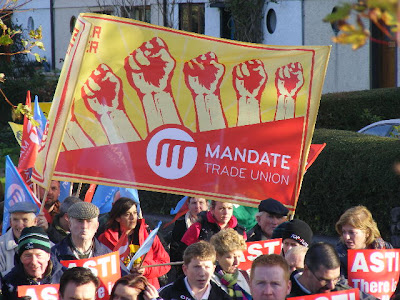 Speaking following the demonstration, Sligo éirígí activist Gerry Casey said that the Trade Union leadership must not compromise in any way with the Fianna Fáil led administration over planned cutbacks to essential health and education services as well as cuts in public sector pay and social welfare rates. He said the campaign needed to be intensified in the weeks ahead and that more public demonstrations and national strikes were needed in order to defeat the government and prevent further attacks on workers standards of living. 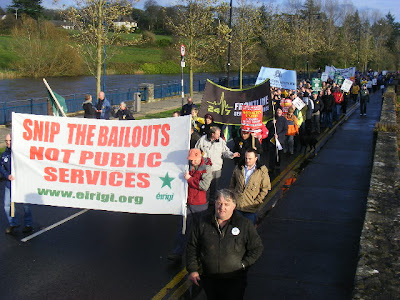 Casey said: "Fianna Fáil and the Green party claim that their planned cuts are necessary yet nothing could be further from the truth. They are shamefully bailing out with €54 Billion of tax-payers money through NAMA their cronies in the banking and development sector who, alongside the government, created this economic crisis. To pay for this they are planning public sector job losses as well as further cuts in public sector pay, social welfare rates and essential health and education services." 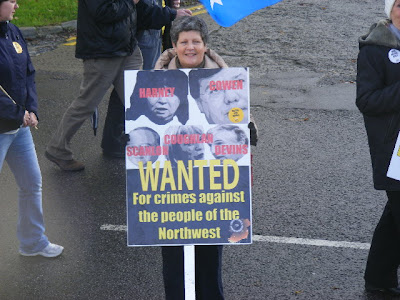 He added: "Just 1% of the population control over one third of the entire wealth in this state yet this administration is specifically targeting the less well off for their savage cutbacks. This is unacceptable. Workers and the unemployed must not be made pay for the greed and incompetence of the wealthy business and political elite. They should instead be taxing heavily the wealthy elite who can afford to pay as well as nationalising the Corrib gas in order to utilise for the benefit of the Irish people the hundreds of billions of euro worth of gas that can be generated from these finds." 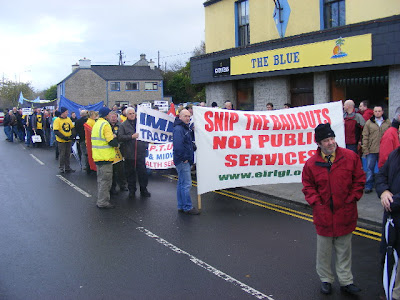 He concluded: "It is essential that the Trade Union leadership now intensify this campaign with increased demonstrations and national strikes. There cannot be, and must not be, compromise with the government over cutting public services and the further slashing of the incomes of workers and welfare recipients. A united front between workers from all sectors, the unemployed and all those affected by the cutbacks can defeat this administration. Today's Day of Action needs to be just the beginning of the fight to build an alternative Ireland based on public ownership and a decent standard of living for all." 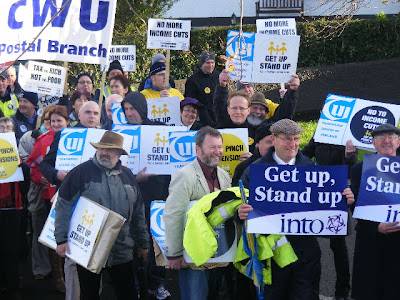 Tír Chonaill éirígí spokesperson Micheál Cholm MacGiolla Easbuig echoed those sentiments. Also speaking from the demonstration in Sligo, he said: "A clear message was sent today to to Brian Cowen, Mary Coughlan and the rest of the political class in Leinster House that enough is enough. They may have expected workers to roll over and meekly accept the cuts they have already introduced and the further savage cuts they have planned. They have miscalculated badly. Today's rallies shows the depth of anger among workers and the unemployed and their determination to face down this administration who expect us to tighten our belts as the wealthy and those who created this economic meltdown continue to live their lavish and exorbitant lifestyles." 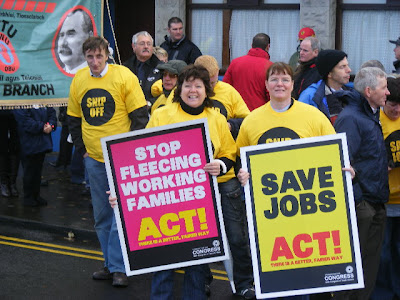 He continued: "Now more than ever it is essential that workers and the unemployed remain united and focused on the struggle against these cuts that lies ahead. Pressure must be maintained on the leadership of ICTU, not just to maintain this campaign, but to intensify it with further demonstrations and national strikes. All measures must be taken to defeat this administrations plans to introduce further cuts in essential health and education services and to make workers and social welfare recipients pay to bail out the banks."
Posted by éirígí Sligeach at 12:21 PM